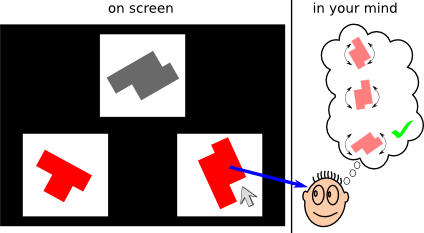 I recently met up with an old friend and we were discussing how good I used to be with directions. My ability to know where I was and return to a place I had been was so good that my friends occasionally called me Rand McNally. One time in college, I went for a drive to intentionally get lost and was unsuccessful. However, after my brain surgery and subsequent treatment, my spatial abilities are some of the most impaired. This was evident from my cognitive testing and also from my recent attempts to do brain puzzles that require mental rotation or spatial comparisons. I know I’ve mentioned this before because it is a prominent aspect of my life now. These recent conversations, though, got me thinking about why my spatial abilities specifically were impacted and whether it is because my ability to internally visualize things is one of the reasons that my visual processing is “slowed” and impaired. I have been focused on my processing of visual stimuli from the world and hadn’t given much thought to whether my ability to internally visualize things had been impacted. I think the answer must be yes. It’s not just difficulty in interpreting outside visual information, but also manipulating internal visualizations as well. As I type this, it seems completely obvious; however, it was not something I had thought about previously…it also got me curious about what kind of visualizing occurs for people who have gone blind later in life and have visual memories to work with. If they have no visual stimuli from the outside world but their visual cortex is still working, I would assume they can still visualize things, possibly in a different way. There will never be a lack of interesting brain concepts to mull over.